Lunch with Yotam Ottolenghi - Plenty for everyone! 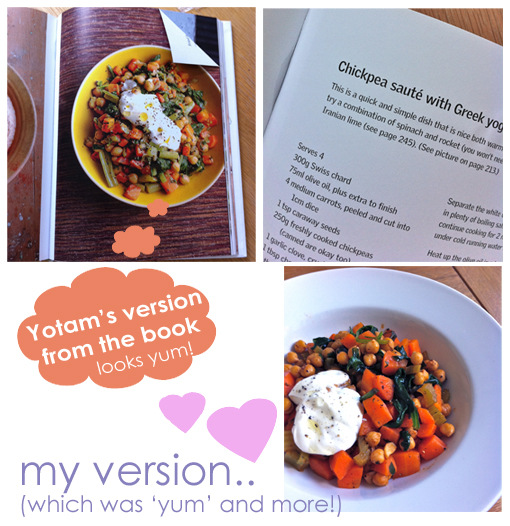 This has only happened once before that I can remember.  I was travelling around New Zealand and the tour driver cooked the most incredible Moroccan lamb (New Zealand Lamb is in-cred-i-ble) – everyone went back for 3rd’s and I still don’t know what the guy put in it (I’ve been trying to replicate it ever since).

I was bought the Yotam Ottolenghi book Plenty for my birthday last year and I still hadn’t got around to cooking anything from it.  Sure, I’d lusted over the amazing photography of his vegetarian delights – but there was so many of his dishes that looked great, I didn’t know where to start.

Thankfully, the decision was made for me when I was faced with an empty cupboard this weekend, albeit a tin of chickpeas, a few carrots, a bag of spinach (ok the recipe calls for chard, but spinach is a very close relative) some coriander (that was almost going over) and some Greek yoghurt.  Ah ha… I could try something chickpea’y from the Ottolenghi cookbook!
…and Bob’s-your-uncle, the Chickpea Sauté with Greek yoghurt recipe on page 211 sounded almost too perfect for these ingredients to be married in. (I just had to pop to the shop to get some caraway seeks, but it was well worth the long walk!)

For those of you who aren’t familiar with Yotam’s work, he’s seriously shaken up modern vegetarian food on the back of his restaurant successes.  His recipes are clearly influenced by a few cultures; Thai, Indian, Lebanese, Iranian - it’s a modern fusion of tastes using fresh herbs and vegetables.  Basically, if you’re a cool, modern, hip vegetarian who owns a Mac or the new iPad, you’ll probably be totally comfortable cooking up Yotam’s innovative dishes.

The Sautéed Chickpea and Greek Yoghurt was so fantastic I am not ashamed to say that I made a whole pan full and polished the lot off in a 3rd sitting.  I’m not a vegetarian, but if the new wave vegetarian food is this good, then I might just join the gang.

If you do anything this summer – go and grab the book and enjoy Yotam’s healthy, tasty, plentiful food ideas for yourself!